Bunch of Heroes 1.5 can be downloaded from our website for free. Bunch of Heroes is suitable for 32-bit versions of Windows XP/7. The most frequent installation filename for the software is: Game.exe. This download was scanned by our built-in antivirus and was rated as clean. The actual developer of the program is NGD Studios. Anthem of Heroes is a super entertaining role-playing game that's ideal for all those who are looking for a simpler and straight-forward gaming experience. It includes a really high-quality character design and you can participate in a bunch of daily events and challenges. Bunch Of Heroes Game Bunch Of Heroes Free Download PC Game Full Version. Download Game Size: 327.9 MB. System Requirements. OS: Windows Xp,Vista,7,8. “Bunch of Heroes” features stylized cartoon like artwork, funky rock and roll music, cutting edge technology, great humor and cooperative gameplay to inspire zombie killers and E.T. Haters alike all over the globe! Become a Hero; Earth needs a bunch of them at least! 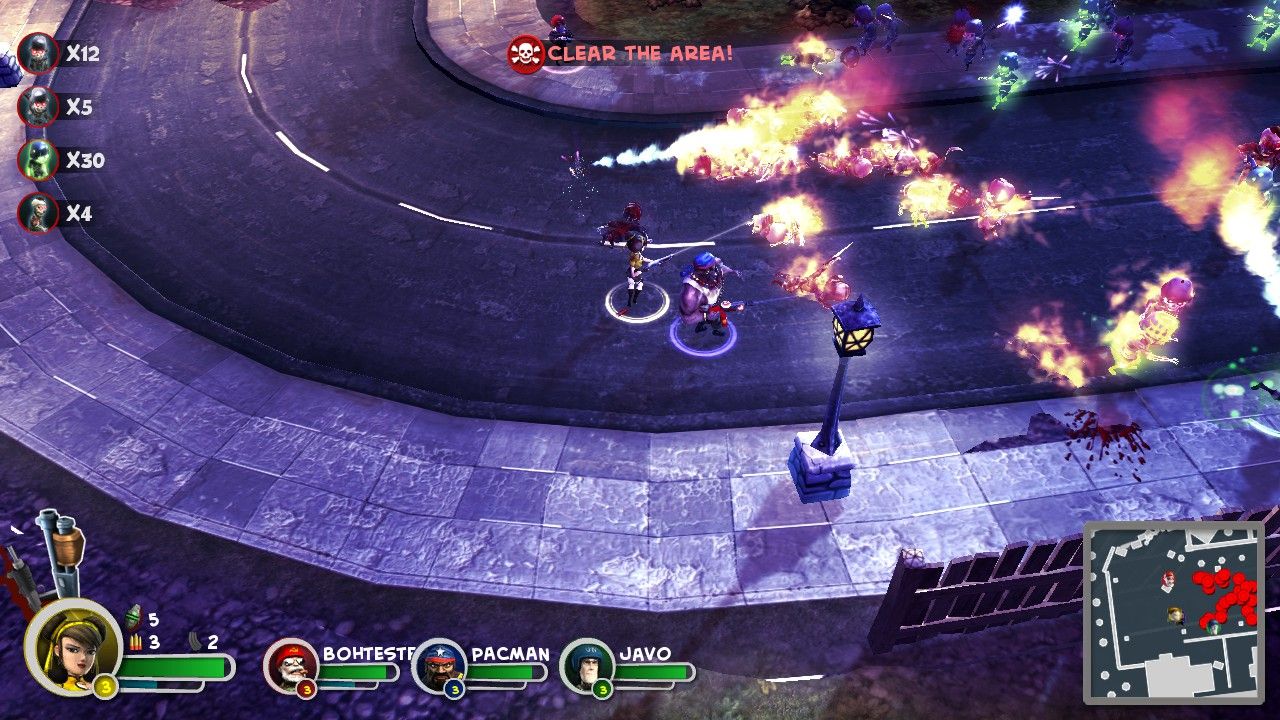 To Say That we'd been anticipating the darker spin-off from allconquering superhero MMO, City of Heroes, for some time now is a mild understatement. There's a little psycho in all of us, and the thoughts of spending another long day fastidiously patrolling the streets of Paragon City, fighting crime and wrong-doing was starting to get to us. Time to release the pressure valve a little. Would City Of Villains hold the answer? Luckily, we were invited into the closed beta test to get a hands-on experience to see for ourselves.

Much relief greeted us with the character-creation screens. At first, it seemed as though Cryptic had really gone to town with the 'baddie' concept, giving you choices between Brute, Dominator, Stalker, Corruptor and Mastermind archetypes. All promising options, and while it didn't take long to realise these were mostly the same classes as in COH but with different names and one or two tweaks, it was forgivable as soon as we encountered all the new clothing options.

At least the Mastermind class gives you something new to play with. Essentially, you're given control over zombies (harrumph), robots, or our favourite, a team of ninja warriors to do your bidding. Here, our notions of building our dark army of the night grows ever stronger, although you only get to control between one and three henchmen at first, and their powers are limited to basic fighting moves until you unlock higher-level training powers.

The background to COH concerns the dastardly Lord Recluse and his chain of seven independent islands, the Rogue Isles - home to every kind of ne'er-do-well you can imagine. Recluse has dominion over the inhabitants, allowing gangs and factions to conduct whatever business they desire as long as his own schemes aren't disrupted. One of which is the rescue of your good self from the infamous Ziggurat prison, a setpiece that forms COV's tutorial.

Presently, the atmosphere is very grim. Dark, with a capital bleak. It feels as though someone attacked City Of Heroes with a giant fun vacuum then, once all vestiges of camp tomfoolery had been eradicated, flipped the switch to blow and covered everything with a coating of depression and misery. Citizens wander about the islands in a permanent state of paranoia and helplessness. Gangs roam (well, hang about their spawn points) with abandon, beating on each other for no reason other than it's something to do. Desolation and oppression abound and the day-glo, colourful world of Paragon City is as distant a memory as it gets.

COH had the good grace to give each liero class a mission path of their own to follow, while including enough random and group-based content to cater for almost all types of player. City Of Villains, it seems from this early play, makes the first eightlevels identical whoever you are.

There's also a problem of focus. Essentially this is an identical game to Heroes, just on different maps and without the valiant nature to your actions. For goodies, this mechanic works perfectly. As a young man suddenly gifted an ability to shoot fireballs out of your penis, you're naturally going to start small, blasting a few muggers and low-rent hoodlums with your rod of justice, before working your way up to tackling ultra-baddies, alien invaders and world-threatening plots of diabolical cunning. All fine, dandy and in-keeping with traditional comic-book norms.

Trouble is, when we set about creating a super-villain character, the back story is already there in our minds. Our Fu Manchu, Blofeld or Dr Doom types already have their secret bases, evil army of robot zombies and global domination plans intact. To therefore be running around with The Ginger Ninjer (evil Dr No type with control over an army of ninja drones) having to pound on the same bunch of low-level thugs as our hero characters did (ostensibly), just doesn't feel right.

What City Of Villains does cater for is the 'action' villain types. Those with similar powers to your heroes, but who've decided to use their X-Ray vision to peer through women's toilets rather than expose robberies. Think Rhino, Venom, Sabertooth, Wolf from Gladiators - the kind of bad guy that would pop up just to have a scrap, rather than the ones engaged in grand schemes to take over the Earth. Of course, don't try to create those specific ones or you'll have the 'Legal Team Of Doom' down on you quicker than you can say, 'Mu hah hah hah ha ha!' Even that's probably copyrighted somewhere...

Hence I had a far more rewarding experience running around with Baddie Thugeson (supposed to be Thuggesson but there's an annoying limit on the amount of cliaracters you can have in your name) -a thawed-out Viking maniac of low brain wattage, imbued with dark auras and a giant stone mallet, out to smash everything lie sees. This at least gave all the random combat some sense of meaning, and meant I was able to progress far easier than with the more cerebral villainy of Ginger.

Tire early, pre-ll levels also give you your first taste of the different criminal factions inhabiting the Rogue Isles - some familiar from the previous game, some new. The Vahzilock, Hellions and Circle Of Thorns are joined by Mafiosi types, golden jetpack wearers, violence gangs, evil sprites feeding off power lines - all promising to react to you differently depending on your interactions with them. However, in this current build it was pretty much a case of blast on sight, work out who you are from your charred dental remains later.

Once you've picked up a few contacts, missions offer some structure to things. In fact, the notions of plot are much stronger here than in Heroes, with missions containing little in-game cut-scenes to set the stage. You'll be tasked with cleaning up rival gang attacks, robbing banks to provide funding for Arachnos, planting bombs in tactical sites, helping out Arachnos's troops on attacks and so on. You're not so much a do-as-you-please villain, as a thug-for-hire hoping to rise the ranks of Lord Recluse's power structure. By the end of level ten, we had a firm idea of our place in the overall scheme and had given up any notions of being a megalomaniac of our own. Always the henchman, never the bride.

The promise is there for the higher levels, although we really hope Cryptic sees its way to improving the notions of true villainy, of playing as a real criminal mastermind if not prior to launch, then soon afterwards. The bases will play a key part in this (see 'Hollow Volcanoes', opposite), as will the actions of rival hero groups. Given the way COV is structured, it's hard to see things straying too far from the established levelling template. However, with more variety in your career paths, more specialisation for the different classes and more of an identity of its own (rather than the current impression of being COH wearing an evil goatee), City Of Villains could prove a big enough draw if you're becoming bored with pulling on the spandex and being so damn good all the time.