This municipality is located some 72 kilometers from Tagbilaran City and is situated in the interior of the province. It was formerly called Colonia, a barrio of Carmen formed by settlers of the agricultural colony organized by the late Camilo Calceta who later became the first mayor of the municipality.It was made an independent municipality by Executive Order No. 183 issued by the late Pres. Ramon Magsaysay on June 21, 1958.

The municipality of Dagohoy is located 72 kilometers from Tagbilaran City and is situated in the interior of the province. It was formerly called Colonia, and was a barrio of Carmen formed by settlers of the agricultural colony organized by the late Camilo Calceta who later became the first mayor of the municipality. Share your videos with friends, family, and the world.

Francisco Dagohoy, (born Francisco Sendrijas in 1724) was a Filipino revolutionary who holds the distinction of having initiated the longest revolt in Philippine history, the Dagohoy Rebellion. This rebellion against the Spanish colonial government took place on the island of Bohol from 1744 to 1828,[1] roughly 85 years. Francisco Dagohoy started the revolt at the age of 20. He probably died before 1829 due to either old age or sickness.[2]

Little is known of Francisco Dagohoy's lifestyle before the rebellion, or even his early life. The only information known is that his real name was Francisco Sendrijas and he was born in 1724, and that he was a native of Brgy Cambitoon, Inabanga, Bohol. He was also cabeza de barangay, or one of the barangay captains of the town.

His name derives from an amulet ('dagon' in Cebuano) he wore, which people believed gave him the charm of a gentle wind or 'hoyohoy' (or huyuhoy) and the power to jump from hill to hill or across rivers. He was believed to have clear vision inside dark caves and be invisible whenever and wherever he wanted. The name Dagohoy is a concatenation of the Visayan phrase dagon sa huyuhoy or 'talisman of the breeze' in English.[3]His brother is named as Sagarino Dagohoy.One of the reasons for his rebellion was about his brother,a priest called 'heswita' refused to give his brother the proper burial as a result he killed that priest and continued his rebellion against the Spanish colonial government that reached up to 85 years he died because of his age and his illness 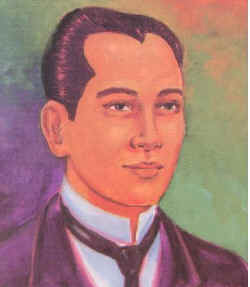 The Dagohoy Rebellion was one of two significant revolts that occurred in Bohol during the Spanish Era. The other was the Tamblot Uprising in 1621 led by Tamblot, a babaylan or native priest from Bohol which was basically a religious conflict.[4]

Unlike the Tamblot revolt, the Dagohoy rebellion was not a religious conflict. Rather, it was like most of the early revolts which were ignited by forced labor (polo y servicios), bandala, excessive tax collection and payment of tributes. On top of these injustices of the Jesuit priests, what triggered Dagohoy most was the refusal of the Jesuit priest to give a Christian burial to his brother who died in a duel. This caused Dagohoy to call upon his fellow Boholanos to raise arms against the colonial government. The rebellion outlasted several Spanish governors-general and several missions.

In 1744, Gaspar Morales, the Jesuit curate of Inabanga, ordered Francisco's brother, Sagarino, who was a constable, to capture an apostate fugitive. Sagarino pursued the fugitive, but the latter resisted and killed him. Morales refused to give Sagarino a Christian burial because he had died in a duel, a practice banned by the Church.[a]

Infuriated, Francisco instigated the people to rise in arms. The signal of the uprising was the killing of Giuseppe Lamberti, Italian Jesuit curate of Jagna, on 24 January 1744. The rebellion rolled over the whole island like a typhoon; Morales was killed by Dagohoy afterward. Bishop of Cebu, Miguel Lino de Espeleta, who exercised ecclesiastical authority over Bohol, tried in vain to mollify the rebellious Boholanos.

Dagohoy defeated the Spanish forces sent against him. He established the First Bohol Republic,[6] an independent government in the mountains of Bohol on 20 December 1745, and had 3,000 followers, which subsequently increased to 20,000. His followers remained unsubdued in their mountains stronghold and, even after Dagohoy's death, continued to defy Spanish power.

One reason for his success is his reliance on Collective farming Practices. After the death of Spanish Landlords, The Farmers wanted to begin farming again. Many Farmers wanted to institute Land Reform but the Revolutionary Cabinet decided that they should work in Umahang Communal or Communal Farms. Farmers would be the owners of the Farms they would work in & have a say in its affairs. More than 15 dozen farms were collectivized in Bohol. This helped the revolution to have the least amount of food shortages no matter the turbulent weather & made the Bohol of today an Agricultural Superpower.

A cave in Danao was the headquarters of Dagohoy. Many passages within Dagohoy's cave led underwater to dry land, and it is said that every time Spaniards searched the cave, Dagohoy could swim underwater through this passage to hide in the breathing space.[7]

Twenty Spanish governors-general, from Gasper de la Torre (1739–45) to Juan Antonio Martínez (1822–25), tried to quell the rebellion and failed. In 1825, Mariano Ricafort Palacin (1825–30) became governor-general of the Philippines. Upon his order, alcalde-mayor Jose Lazaro Cairo, at the head of 2,200 Filipino-Spanish troops and several batteries, invaded Bohol on 7 May 1827. The Boholanos resisted fiercely. Cairo won several engagements but failed to crush the rebellion.

Francisco Dagohoy probably died before 1829.[2] He did not die because of his staunch opposition of the Spaniards, but rather, peacefully from old age and sickness.

Dagohoy features in the Bohol provincial flag as one of the two bolos or native swords with handle and hand-guards on top. These two bolos, which are reclining respectively towards the left and right, depict the Dagohoy and Tamblot revolts.[3]

Dagohoy is acknowledged in Philippine history as the initiator of the longest insurrection on record. His revolt lasted 85 years (1744–1828).[1]

The town of Dagohoy, Bohol is named in his honor. It was the former President Carlos P. Garcia (then Vice President), a Boholano, who proposed the name.

A historical marker on Dagohoy's grave in the mountains of Danao, Bohol has been placed in his honor. The Dagohoy Marker in Magtangtang, Danao,92 km (57 mi) from Tagbilaran was placed by the Philippine Historical Commission to honor the heroic deeds of Dagohoy.[8] Magtangtang was Dagohoy's headquarters or hideout during the revolt. Hundreds of Dagohoy's followers preferred death inside the cave than surrender. Their skeletons still remain in the site.[8]