Here are some old historic Roblox places many of you should see. All of these places which will be listed are unique in there own way. I strongly reccomend all of you guys to come to these places

The Angel of Truth is probably the most detailed place ever to be made on Roblox in 2006. This statue had marveled Robloxians at the time. This statue showed the real potential on Roblox. A user named DigitalMessiah made this beautiful, majestic angel which is pointing up to the heavens. DigitalMessiah was an account made by the Roblox administrators to create this
magnificiant piece of art. Even though there are now many other statues surpass in detail and design, this is still a good place to see some of the early

In a interview with Stealth Pilot (who now resides on the account PilotLuke) he revealed that his first famous game ever on Roblox was a game called Mustafar. Mustafar is a brickbattle Roblox game which is considered to be one of the first Star Wars based games on Roblox. This game was also featured in the second online Roblox Advertisement Video. This game features various mountains, a river of lava, and two buildings which are connected to each other by a bridge. Sadly, this game is no longer fully functional due to updates. The only weapon which still works in this game is the bouncy ball tool. Despite this, it is still a good place to go to learn more about Roblox.
Now this is a game most of you know. This is Ultimate Paintball, the one and the only. Ultimate Paintball was created by Miked (who is semiactive). This showed true originality and creativity on Roblox. This game features two teams. The Red Team and the Blue Team. Each team has it's own base. Once you spawn, you are given a specific paintball shirt and a paintball gun. The objective is simple. You are supposed to capture the enemie's flag and return it back to your base. This game was a popular hit and is still played today. This game has withstood the test of time and has become one the most widely known games on ROBLOX.
Thrillville is a game which was created by the user JJ5X5. Many of you have already heard about him and his game before from previous posts. Now I will go a bit more indepth about the gameplay of Thrillville. Thrillville is a game with no objective. It is just a themepark where you go on various rides which usually leads to death. You can also play with legokid. Legokid is a figure which responds to various commands given by a user. Thrillville shows how creative and fun some places were at that time. Even though they were quite simple.
Stairway to Heaven was created by tingc222. This game was also featured on the second online Roblox Advertisement Video. This game is a brickbattle game with an unusual design then most of the games of that genre. There are a few buildings, one church, and a few trees. There is also a grave next to the church. In the grave, there is also stair case that leads to the sky. This is why the game is called Stairway to Heaven. This place shows a good ammount of detail and unique design from early Robloxians. This is a good place to see the design of the buildings and to bring your friends to do a brickbattle with you!
Santa's Winter Stronghold
Around Christmas time, the Roblox team created a game called Santa's Winter Stronghold. Once you spawn in this game, you are supposed to gather the greatest ammount of presents and try to eliminate your opponents. This game is a favorite to many Roblox veterans. Sadly this game is shut down. There are various copies of this game you can explore which are almost exactly like the original. I strongly reccomend coming to this classic Roblox Christmas themed place. 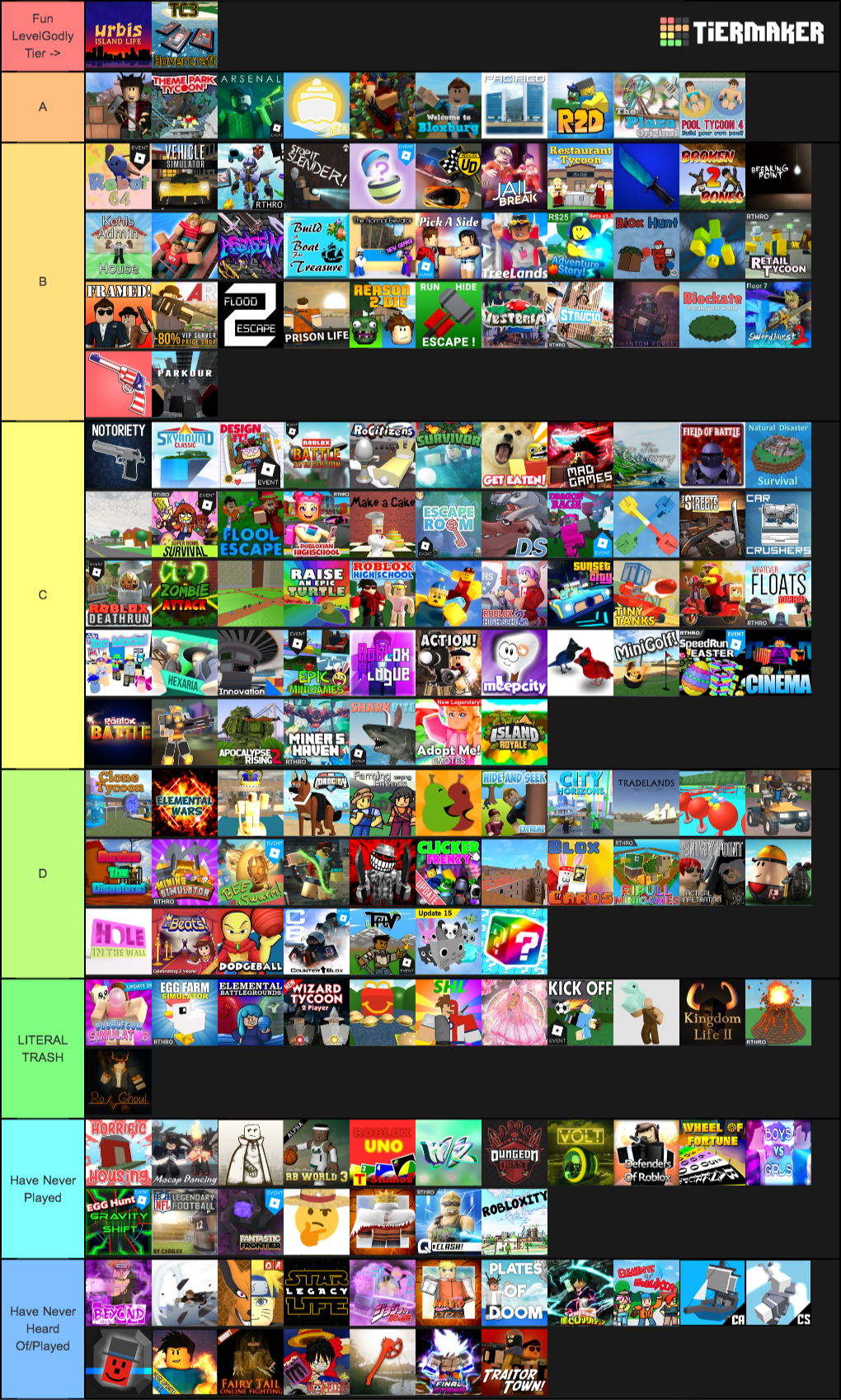 Now, almost everyone knows this game right? Well, for the people that don't know Crossroads is the first game ever to be made on Roblox. This Roblox game is a classic brickbattle like most first games. The game
as evolved over the years. This game features buildings on a mountain, inside of one, or just on a flat surface. Many Robloxians treasure and play this game knowing that it is the one of the greatest.
The Haunted Mansion, which was made by Shedletsky, is a brickbattle game which came out sometime in October 2006. This game was also featured in the second Roblox Advertisement Video. his game really proved Shedletsky's talent as a builder and scripter. This is one of the reasons he is one of the most popular Administrators. Anyways, once you spawn you will see a haunted house with various rooms, closets, and one basement. Outside of the mansion there is a small graveyard and various terrain. This game is a fun to play with friends and to just roam around and experiance some classic building style.
Another classic brickbattle place, Chaos Canyon, is a western type style game where you destroy other players and terrain. There are various mountains, buildings, a partially destroyed temple, signs, and one giant staircase in this game. It is a truly interesting game in design. This could possibly be one of the first western type games. This game also has various models created by various users like Stealth Pilot and Tingc222. This is also a fun game to play with friends.
Sword Fighting On The Heights is probably one of the most popular sword fighting games on Roblox. This game is also made by Shedletsky. Once you spawn in this game, you are in a arena with various obstacles. There is various locations where armor and swords (depending on version) are spawned. There are two versions of this game. One which is the first version of the game, the other the most recent version of the game. Many veterans play the original, because it really brings back memories of 2008 Robloxia to those members. This the first version is the one I would choose to go to.
Well, these are some handpicked classic Roblox places all of you guys must see. These places really let you see some of the games old Robloxians played back in day. I hope you found this information helpful!
Archive

One of the coolest ROBLOX experiences is the rush of pulling up the Games page to see what people are playing. Every day, there’s something new at the top of the charts — whether by sheer popularity, earning serious ROBUX, getting lots of thumbs up, or hooking players for repeat play sessions. In this article, we’re stepping back from the day-to-day fluctuations of what’s hot and looking at what games you, the gamers and developers of the ROBLOX community, turned into trends throughout the month of March.

This list is based entirely on the number of player visits between March 1st and March 31st. We want to hear what you played last month, as well, so keep reading and let us know in the comments!

If you follow along with us every month, you see that many of the top games have extremely devoted core fan bases. Once again, Work at a Pizza Place is the chart-topping game, with another strong showing of almost 2.75 million play sessions in March. Dued1, who we introduced live last month on an episode of The Next Level, has his game in a comfortable state of popularity, and the title’s penchant for emergent and unpredictable gameplay have prevented anything else from truly shaking its momentum.

Twisted Murderer, Ripull Minigames, and Super Bomb Survival! all make appearances in the top 25, with a little boost from the Egg Hunt 2015, which kicked off at the end of March. Even without the event, all three games would have been on the list, so our hats are off to the developers for their hard work in creating their unique Egg Hunt themes.

Hide and Seek Extreme is a newcomer to the list, having skyrocketed up the charts in March after its January launch. Its popularity has since waned, but it still has a steady stream of players who enjoy playing a classic playground game in over-sized environments. Speed Run 4 used new level packs to make a return to the top 25 list, proving that players can’t get enough super-fast flip-jumping obstacle-course action, while a couple recent titles (Fairy Tail Online Fighting and MORTUS RPG, in particular) show that there’s a significant demand for epic combat arenas and open-world RPGs.

In Hide and Seek Extreme, you’re either really small, or the world is really huge. Either way, you have to use bounce pads to access certain hiding spots, which is always fun.

Several games that we find exciting at ROBLOX HQ narrowly missed the cut. Looking further than the top 25, we found that Mining Inc amassed 695,159 visits, Murder Mystery 2 racked up 457,808 visits, Club Boates attracted 395,514 dance fiends, and Hex had another strong showing with 356,273 visits. The well of awesome ROBLOX games keeps getting deeper.

Remember, this list is based solely on the number of people who visited the games during the month of March. We know there are thousands more games, many of which are excellent but not necessarily the most popular. Make sure to check out ROBLOX’s Facebook, YouTube, and Twitch, where we spotlight less popular creations all the time!

What was your personal favorite game last month?