After a two-week break for the holidays where they aired Best of 2020 clips, Impact Wrestling is back with new matches on AXS TV and Twitch for those of you us who don't have AXS TV, which is most of us. Let's recap this son of a bitch.

After a Kenny Omega centric recap of the end of 2020, Ace Austin heads to the ring, accompanied by Madman Fulton. Then Blake Christian, K.C. Navarro, and Krazzy Steve.

Who are these new people and have they been tested for COVID? I hope so. Impact starts the year off strong and lets these two kids get their stuff in too in a match designed to hype people up for the Super X Cup at Genesis on Saturday. Of course, the only person here getting a push anytime in the near future is Austin, so.. wait, what?! Crazzy Steve gets the pin here.

Josh Matthews and Madison Rayne shill for Genesis and Hard to Kill. Kenny Omega and Don Callis are apparently still in their tour bus in the Skyway Studios parking lot. They've just camped out there for six weeks I guess.

Sami Callihan cuts a promo at his hacking station. You can tell there is some serious hacking going on here because of all the green-tinted terminals. Any hacker who knows anything about hacking knows you have to use the bright green terminal to get anything done.

Yeah, I'm sure he was talking about Eddie Edwards or something, but I got lost trying to zoom in on his screen to see what's going on there. I think he might be playing Lemonade Stand on the little monitor on the right.

We get another commercial from Tony Khan and Tony Schiavone, wearing Happy New Years gear. Tony says this is a time to help the less fortunate, and by less fortunate he means Impact Wrestling through these paid commercials. Schiavone goes over the card for New Year's Smash Night 1 next week. Khan responds to Don Callis claiming to be responsible for the formation of AEW by pointing out that Khan is responsible for everything but the wrestling. He calls himself a patron of wrestling and Callis a parasite. He says he got a hundred dollar bill from his grandmother in a Christmas card and he's gonna spend it on another Impact commercial next week.

Kenny Omega, Don Callis, and the Good Brothers hang out on the tour bus, touching each others' belts. Callis talks up their match at Hard to Kill a week from Saturday. Kenny recites the lyrics to Queen songs and then says they're Bullet Club for life.

Rhino and Cousin Jake vs. Eric Young and Joe Doering

Rhino and Cousin Jake are in the ring so Cousin Jake can cut a promo. Oh god! What did I do to deserve this? Thankfully, it's brief. He pleads with his cousin Code Deaner to set aside his new heelish ways and return to him. Then he calls out Joe Doering and Eric Young.

Young, Doering, and Cody Deaner, who has shaved his head now, come out to the top of the stage. Young says Cody Deaner only answers to him now. They head to the ring and Cody wrestles in place of Young.

Rhino and Cousin Jake vs. Cody Deaner and Joe Doering

Rhino and Cousin Jake have a match with Cody Deaner and Joe Doering. You know what, I really have to hand it to Eric Young for trying to help Cody Deaner become a respectable young man. He's definitely more tolerable like this.

Cousin Jake blows it in this match by trying to talk sense into Cody, allowing himself to get dropped with a DDT and pinned.

Gia Miller welcomes Matthew Palmer to Impact and asks him what caused him, a security guard, to accept Moose's challenge to go three minutes in the ring with him. Palmer breaks kayfabe and reveals security guards on wrestling are actually indie wrestlers. Palmer is looking for his break.

Miller asks him what happens if he wins. Palmer says 'I guess the world will know who Matthew Palmer is' and then immediately looks worried. Is he wanted for a crime?

Speaking of crimes, Acey Romero talks to Johnny Swinger looking for information on the shooting of John E. Bravo. Swinger tells him to talk to the Knockouts because this 'sounds like the work of a brizz-oad.' He tells Romero to just barge right in their locker room and claims he does that all the time. God bless Johnny Swinger.

Wrestler of the Year and Knockout of the Year Deonna Purrazzo heads to the ring with Kimber Lee. She talks some trash about Taya Valkyrie and declares herself the Iron Woman of Impact Wrestling.

Taya Valkyrie comes out with Rosemary. Taya talks about her history with the Knockouts Championship and claims she'll bring the belt home at Hard to Kill. Purrazzo says Taya's boyfriend left for WWE, her manager doesn't care about her, and Rosemary will leave her soon too. Taya is yesterday's news and this is the Age of the Virtuosa.

They'll just have to agree to disagree then.

Rohit Raju talks to Chris Bey backstage. Rohit says his New Years resolution is about forgiveness so he forgives Bey for weaseling his way into the X-Division Championship match at Hard to Kill. Bey says he was just paying Raju back. Raju says they're even then. Bey says not until he's champ again. Raju says they should team up on Manik, unmask him to get him disqualified for being TJP, and then settle things amongst themselves. Bey agrees and they head off in search of Manik.

They find TJP reading Trump Monthly magazine backstage. TJP pretends he's not Manik and hasn't seen him. They challenge TJP to team up with Manik in a tag team match with them tonight. TJP says he doesn't get along with Manik, but he'll pass along the offer if he sees him.

Jordynne Grace and Jazz vs. Havok and Neveah

Jordynne Grace and Jazz head to the ring, followed by Havok and Neveah. They have a match, a pretty good one in fact, in case anyone in 2021 doesn't know how good Impact's Knockouts Division is. Putting an end to her hopes of a run with the gold, Jazz gets murdered by a piledriver from Havok.

Havok and Neveah advance to the tournament finals. Grace leaves in a huff.

Gia Miller interviews Rich Swann and the Motor City Machine Guns about their match with Kenny Omega and the Good Brothers at Hard to Kill. You're not going to believe this, but these guy believe they're the ones who are going to win at the PPV. 'These letters on this belt don't say AEW. It says Impact World Champion,' says Swann in what I want to believe was an homage to Captain America saying 'you think this A on my head stands for France?!' Alex Shelley suggests they go invade the tour bus in the parking lot.

After some commercials, they do just that. They pound on the door of the bus but Impact spent half its annual budget to afford having this bus in the parking lot so Kenny and the Good Brothers are waiting outside so they can fight on the lawn. Swann and the Machine Guns get their asses kicked. Kenny says they were 'easy to kill.' They get back on the bus.

Jazz searches for Jordynne Grace backstage. Grace apologizes for walking off, but she was frustrated. Jazz says losing wasn't part of the plan. Jordynne is disappointed in herself and also disappointed she made Jazz put her retirement on hold for this. Jazz says she's grateful for the opportunity to get in the ring with the new generation. Grace says she fit in well and asks if Jazz has any more matches left. She challenges Jazz to a match at Genesis. Jazz accepts.

Deonna Purrazzo and Kimber Lee find Father James Mitchell backstage and want to know if he's successfully turned Su Yung into Susie yet. Mitchell says she's no longer Su Yung, but there's one problem. She walks out in a suit looking all serious and introduces herself as 'Susan.' Okay, we should have seen that coming.

Moose heads to the ring. He's got to beat Matthew Palmer in less than three minutes to win. Yes, this guy.

As you can imagine, Moose kicks this guy's ass all over the ring, but he's too cocky about it so instead of pinning him in 30 seconds when he clearly can, he continues to play with Palmer instead. WIth 20 seconds left, Moose is ready for the spear, but Willie Mack comes out and distracts him. The clock runs down and Palmer escapes the ring, victorious.

Moose is obviously not happy about this.

Ethan Page seeks counseling for his issues from his own alter ego, Karate Man. Page thinks maybe the problem is Impact Wrestling. Karate Man calls Page a bitch. They face off. Yes, you heard that right.

Page wants a match with Karate Man. Karate Man says they'll do it on his terms, Karate terms, at Hard to Kill.

Josh Matthews and Madison Rayne tell us what's coming up from Impact. This Saturday at Genesis: The Super X Cup. Jazz vs. Jordynne Grace. Moose vs. Willie Mack in an I Quit match. Next week on Impact, Rich Swann vs. Karl Anderson in a non-title match with everyone else banned from ringside. At Hard to Kill, Kenny Omega and the Good Brothers vs. Rich Swann and the Motor City Machine Guns. Stating Tuesday, January 12th leading up to Hard to Kill, it's Wrestle Week, with Impact-themed programming on AXS all week. 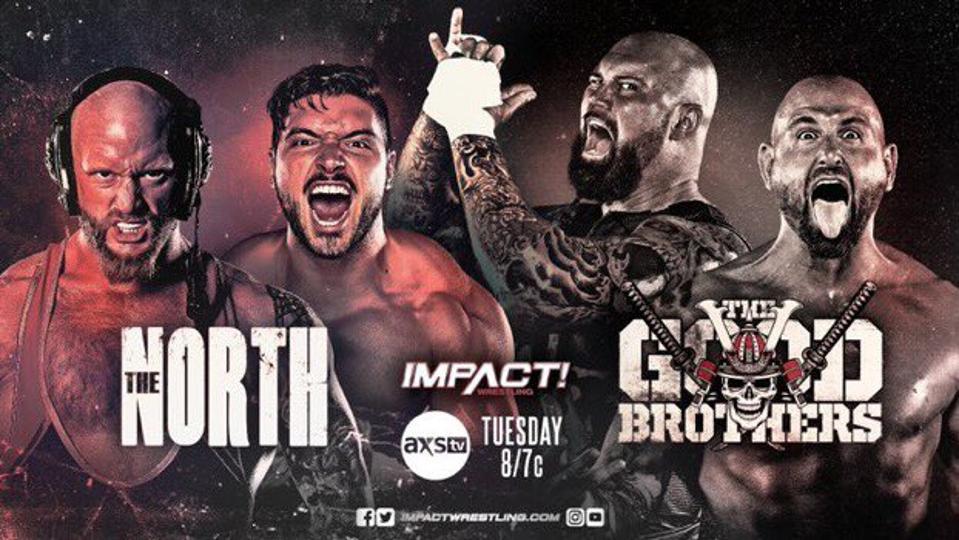 And now it's time for the main event. Eddie Edwards and Sami Callihan brawl out to the stage, skipping all entrances and getting right down to business. They brawl to the ring and engage in ringside violence for a good ten minutes, busting Edwards open. Finally, with just five minutes left in the show, they make it inside the ring and the ref is able to officially start the match.

But that only lasts a minute before the ref gets sick of their crap and throws the match out. They continue to fight anyway. Edwards eventually gets control of the baseball bat and is about to destroy Callihan when Callihan uses his hacking skills to show that Alisha Edwards has been kidnapped on the Impactron. Edwards runs off to rescue her, but when he finds her, Ken Shamrock jumps him.

Shamrock and Callihan beat the crap out of Eddie. They tie him up with barbed wire and hit him with the bat. They leave and Impact goes off the air.

As far as I could tell from glancing at the viewer count all night, Impact peaked at just under 6,000 right before the main event. I thought it was a good show and I'm glad to see that, at least on Twitch, at least some of that inflated AEW crossover audience from before the holidays has returned.

On Saturday, we'll be recapping Genesis live as it airs on Impact Plus, so join us back here for that. And come back Thursday morning too for recaps of Wedensday's AEW Dynamite and WWE NXT.

Hard To Kill is a professional wrestlingpay-per-viewevent produced by Impact Wrestling, which is annually held during the month of January. The event was first held in 2020 and then revived for a second edition in 2021.