Dec 02, 2019 Waves Audio have announced that the OneKnob Wetter reverb VST plugin is available for free download on Cyber Monday 2019. OneKnob Wetter is an easy-to-use reverb effect. It is part of the OneKnob product lineup which consists of single-control audio effect plugins. The plugin has a 4.5-star rating on the Waves Audio website. Download: Saturation Knob by Softube (Available for Windows & Mac, 32-bit, 64 bit, VST, AU) X-tube. X-tube is a free tube saturation VST plugin developed by Xenium Audio, it is a simulation of 12AX7, a vacuum tube. With the processing of 64-bit floating-point, it supports Stereo, Mono, Quadro, and 5.1 tracks.

We’ve carefully selected, blended and mapped several parameters to one knob for your convenience, as in some cases we don’t need to dig deep but act fast instead. All three work best as channel insert, though you may try Space Knob on return track setting it 100% and playing with the send level.

Distortion unit that delivers some nasty wide-band distortion (stereo). Great for when you quickly want to add some tone and color to your sound. Sounds good on drum groups and percussion tracks, adds grit to bass lines, leads, keys, you name it.

But stay moderate with it if you just want to slightly accent the transient (or go nuts with 100% just to see how it sounds).

Mid-sized room reverb (stereo). Pretty bright one, creating a mid-sized space, somewhere in between a large room and a small hall. Works well on almost anything, from percussion to synths and acoustic guitars.”

Effects and processors don't get much more simple than Waves' new OneKnob range. But is this a case of one knob to rule them all, or are these plug‑ins simply nobbled?

Waves have spent the last few years putting a friendly face on music technology. Their Artist Signature bundles conceal some pretty complex signal processing behind a handful of faders with 'producer‑friendly' labels. The three treble EQ settings on their Chris Lord‑Alge Artist plug‑ins are, for instance, called 'Bite', 'Cut' and 'Honk', with nary a value in kHz in sight. To its adherents, this philosophy makes effects and processing more accessible to the non‑technical, and encourages users to focus on how things sound rather than on numbers. To its detractors, it 'dumbs down' music technology, offering a quick fix that yields no understanding of the underlying processes and doesn't help to educate the user.

Those who tend to the second viewpoint should probably stop reading this review now, because Waves' OneKnob series takes their philosophy to its logical extreme. It consists of seven plug‑ins dedicated to particular functions, each offering — you guessed it — one knob. You simply insert the plug‑in over whatever track you want to process, and turn the knob until you're hearing enough of the effect. Simple, but is it effective?

The OneKnob plug‑ins are available in all common native formats, but not as TDM plug‑ins, and form part of the Waves version 8 ecosystem. This can co‑exist with older v6 or v7 plug‑ins on your computer, but as with version 7, even if you want to install just one plug‑in on a machine that isn't connected to the Internet, you'll need to download the entire 1.2GB Waves 8 installer. Authorisation uses an iLok licence. 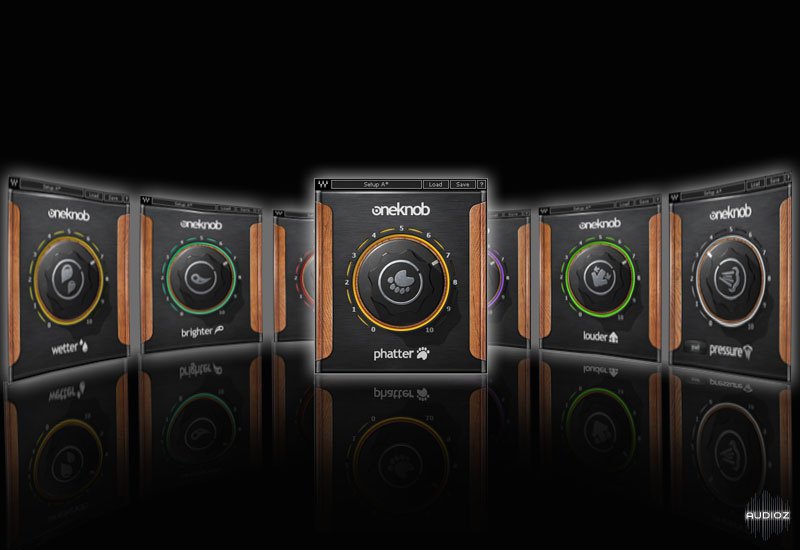 As with the Artist Signature plug‑ins, it's clear that more is going on in these processors than meets the eye. In most of them, the knob does not simply control a single parameter such as compression threshold or reverb wet/dry balance. Mac endurance crack 2. There also seems to be an element of programme‑dependence in some of the processes, making them more flexible than you might expect.

Tackling the plug‑ins in alphabetical order, we begin with Brighter, which, as the name suggests, 'intelligently” applies a broad treble boost to your signal. At low settings, the boost starts around 3kHz, but as you turn up the dial, its focus moves higher up the spectrum. I found this to be one of the more useful processors in the bundle: when you want a source to be brighter, you can insert OneKnob Brighter and turn it up, and chances are it will deliver the goods. That said, you don't have to be Mutt Lange to figure out how to use EQ to similar effect.

Next up is Driver, which seems to have been created with something like an Ibanez Tubescreamer in mind: as you turn it up, it applies a warm‑sounding overdrive and a stonking mid‑frequency boost. It's perfect for some sources, but loses too much treble and bass to be much use as a general‑purpose warmer‑upper. For most things that aren't electric guitars, you'd need to run it as a parallel processor, which rather defeats the point of making a plug‑in so simple.

OneKnob Filter is the odd one out in the collection: its dial starts at 10. As you turn it anti-clockwise towards zero, it removes progressively more high frequencies from your signal. Waves have also bent their own rules by including a second control, which switches between several preset resonance settings. It's a pleasant‑sounding, smooth filter, though Waves' idea of 'extreme' resonance is rather polite.

Louder, meanwhile, applies 'a combination of peak limiting and low‑level compression with automatic makeup” to boost the RMS level of whatever you feed through it. I had high hopes for this, as I quite often find myself needing to quickly throw a simple limiter across the stereo bus to catch stray peaks and add a bit of welly to the signal. OneKnob Louder is certainly simple, and actually does the second part of that job very well, but falls down rather heavily on the first part by not being a true limiter: if you use it on the master bus, chances are you'll still see clipping. Still, as a quick way of making a drum loop sound more impressive, it does have its uses.

Phatter aims to add substance to anything that is a bit weedy at the bottom end. In practice, it seems to be little more than a low‑frequency EQ boost, as it doesn't appear to be able to 'fill in' missing fundamentals in the way that Waves' Maxx Bass and other low‑frequency enhancers can. As such, it does a perfectly good job, but once again, it's hardly rocket science.

Like Filter, the Pressure compressor offers a subsidiary control, in this case letting you boost or attenuate the input signal to hit the compressor harder or softer, while the solitary knob appears to adjust threshold, ratio and wet/dry mix simultaneously. The compression itself struck me as being close in character to the classic Universal Audio 1176; in particular, the brutal squashing that your input signal receives with the dial on 10 has a definite 'all buttons in' quality to it. Again, this is a plug‑in that has limited applications in a conventional music mix, though it could be handy on drum loops and the like. 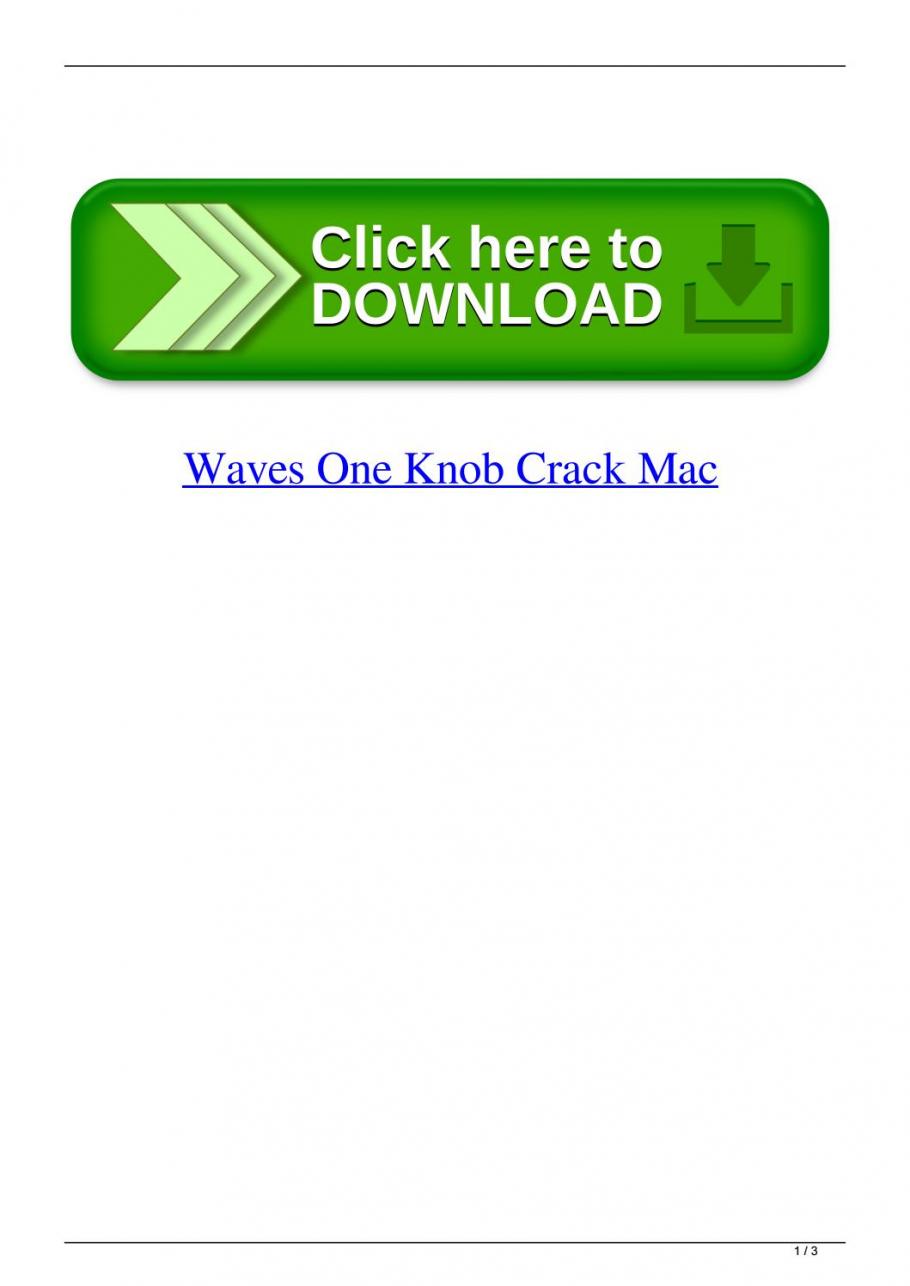 Finally, Wetter is a reverb designed to be used as an insert effect rather than on an auxiliary send. As you turn the dial up, the wet/dry balance changes, and so too does the reverb itself. In fact, to quote Waves' description, it moves 'From short, bright ambiences that are felt more than heard, to longer, darker spaces”. This makes it slightly more versatile than you'd expect of a one‑knob reverb plug‑in, and the reverb itself sounds perfectly good, but even so, the chances of it working on everything are not high.

One For The Money

I was careful to approach the OneKnob series with an open mind, having been surprised by how useful I've found some of Waves' Artist Signature plug‑ins, and I can see how they might be handy in a live DJ'ing context, or for quickly throwing together a couple of loops. For conventional music mixing applications, however, I think many people will find these plug‑ins too limited to justify their cost. Given the choice, I personally would save up and get Waves' rather excellent CLA Artist Signature bundle, which is vastly more powerful and more versatile without being at all intimidating or difficult to use. If you're dead set on the simple approach, meanwhile, Toontrack's EZ Mix does almost everything that this bundle can, and a lot more besides, and is far cheaper. Admittedly, some of its presets offer a dizzying two or even three controls, but let's face it, if you suffer from a fear of faders, you probably shouldn't be using a modern DAW in any case!

Waves' OneKnob plug‑ins are nothing if not simple, and can work well on the right sources, but many people will find the single control too restrictive, especially at this price.

I have been using my MacBook for a while and I decided to install Windows 10, via Bootcamp, just to see what it was like. I was planning to get a product key, later, but I wanted to see if it was worth it. However, after using it for a couple of days, I noticed I could use it like any other PC, without annoying watermarks covering my view.So, I went into settings and saw that my PC is activated with a license that is linked to my account. Once I was done, I knew, because I never gave it a product key, that I would be limited on my features in things, like getting rid ofa watermark or customizing my view.